VIVA LA REVOLUCION WITH CHARLES & CAMILLA The Prince of Wales and Duchess of Cornwall’s visit to Cuba was the first ever by members of the British Royal Family.

FOCUS: THE NEWS IN WORDS & PICTURES The Queen in Somerset; the Countess of Wessex supports women peace builders; the Princess Royal’s family at the Gatcombe Horse Trials . . .

THE REINVENTION OF DUCHESS KATE Putting those ‘royal feud’ rumours behind her, the Duchess of Cambridge took on a new patronage and showcased her new look wardrobe.

JALLIANWALA BAGH: BRITAIN’S SHAMEFUL SCAR The centenary of the infamous massacre in the Punjab showed that the legacy of the British empire remains controversial.

CROWN PRINCESS MARY IN TEXAS AND ETHIOPIA Denmark and Mary’s global brand have never been higher. HRH’s latest tours were continents apart, but united by charm and some great fashion.

QUEEN VICTORIA: THE INIMITABLE MONARCH An intimate exhibition opens up Buckingham Palace – a reminder of the days when it was the family home of Victoria and her beloved Albert.

THE WORLD AWAITS MEGHAN AS ROYAL MUM Engagements at Canada House and for the victims of the New Zealand terror attacks were important for Harry and Meghan as their joyful day neared.

FOCUS: THE NEWS IN WORDS & PICTURES William and Kate join the Irish Guards; the Duke of York and Princess Eugenie support the Royal National Orthopaedic Hospital . . .

FULFILLING THE IBEROAMERICAN DESTINY King Felipe and Queen Letizia’s official visit to Argentina was the first by Spanish monarchs since 2003 – times have changed, shared dreams remain.

FOCUS: THE NEWS IN WORDS & PICTURES Queen Letizia at the Royal Monastery of the Incarnation; the annual Rose Ball in Monaco; the Duke of Sussex at the YMCA South Ealing . . . 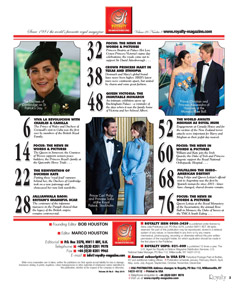